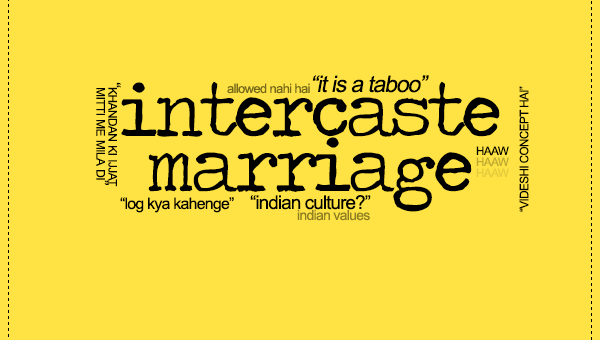 Discrimination based on the caste system has ruined the society and created differences among the people belonging to different castes. Activists, thinkers and leaders are divided over this. Dr Ambedkar’s famous quote from Annihilation of Caste, wherein he stated that inter-caste marriages were “the real remedy for breaking caste”, is often cited. Ambedkar thought “fusion of blood” would create the feeling of kith and kin.

Ambedkar’s advice remains unheard. The Indian Human Development Survey reported that 95% of Indians still find partners within their subcastes. As India becomes more globalized, there are intense deliberations in orthodox families on the merits of getting married within their own community as mostly seen in states like Punjab and Haryana. Out of all the horrifying problems faced by a couple after withstanding an inter caste marriage from disowning by the family to being ostracized and difficulty in survival, honor killing is the most tragic of them all. In consideration with the same; Three relatives of a man who married a Dalit woman around a month-and-half ago were allegedly hacked to death by the woman’s kin in a hate crime in Naushehra village, 40 km from the district headquarters. According to them, the man, Harman Singh, a 22-year-old from the Jat Sikh community, married Bavy, a 20-year old from the neighboring village, despite opposition from her family.

The central and state governments had introduced the inter-caste marriage benefit scheme to abolish caste consciousness lately but the orthodox families of both rural as well as urban areas remain anchored to their roots of thought. A man named Vikash Kumar of Yamunanagar Harayana was very recently harmed and heavly beaten by his wife family after undergoing an intercaste marriage. Punjab and Haryana are often in the news for honour killings, but that seems to be a reflection of how many people are crossing the boundary. Haryana has 17.6% inter-caste marriages while Punjab has 22.4%.

Similarly In October last year a suspected ‘honour killing’ incident took place wherein a runaway inter-caste couple who had entered into a relationship was killed and their bodies found abandoned at Sappanwali village of Abohar in Fazilka district of Chandigarh, Punjab.