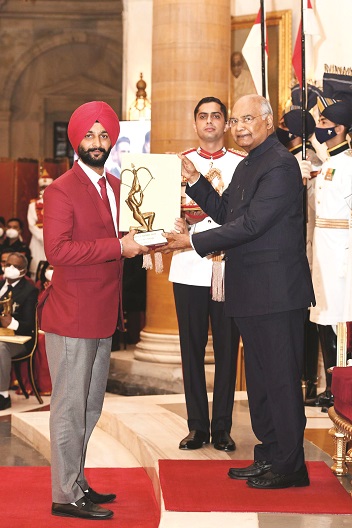 From a middle-class family of farmers in Haryana, Harvinder Singh passed through each and every obstacle to make his dreams come true and got India its first archery medal in the Paralympics. In conversation with Urban Melange, he talks about his journey and how he turned challenges into an opportunity.

His great skills, a determination is what got India a bright position on the map of archery at the Paralympics. His Bronze medal brought a sense of pride in each and every person’s heart in the country. “I may have won the medal but behind the scenes, many have worked for it. My coaches, family, support staff, SAI had a big role to play in achieving this feat. It’s a team effort,” says 31-year-old archer Harvinder. “Obviously they’re an archery powerhouse and have been dominant against us. The key was not to let him dominate. It really paid off,” he further adds while talking about winning the shoot-off with a perfect 10 against Kim from Korea.

Son of a farmer, Singh was born in a remote village Kaithal in Haryana. While he was one and a half years old, he was suffering from Dengue, that is when a local doctor administered him an injection that had some adverse side effects due to which his legs stopped working properly. He says that he then accepted his fate and decided to not go on for any further treatment. He believes that bliss lies in acceptance and once you accept your fate, life seems to be beautiful.

He did not lose hope and went ahead with his education, and he holds a Masters’s and Doctoral degree in Economics from the Panjabi University of Patiala. He for the first time saw archers training in the year 2010 and then caught the telecast of the London 2012 Paralympics which motivated him to try his hands at the sport. He worked hard and dedicated his time and efforts to the sport. Talking about his life’s mantra, he says, “Mehnat itni khamoshi se karo ki safalta shor machade” (work hard so silently that your success makes all the noise). After working hard, he tried to go ahead with the national competitions, and he won his fare share of medals before going to international games.