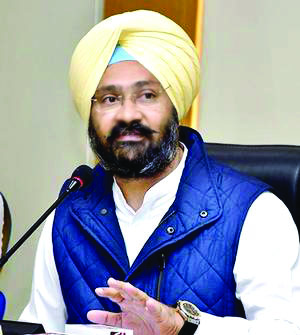 With politics running in his blood, Parminder Singh Dhindsa has seen his father, Sukhdev Singh Dhindsa always working religiously for his people and his state. Parminder is currently MLA from Lehra and was the leader of Shiromani Akali Dal Legislature group in the Punjab Legislative Assembly until he quit. For the tenure from 2012 to 2017 he was the Minister for Finance and Planning and before that from 2007 to 2012 he was the Minister for Public Works (B&R) in the previous Punjab Government.

He started his political career in the year 1998 when he was appointed as the General Secretary of the Youth Akali Dal. He was around 25 years old at that time and was all ready to be a public servant and devote his time to society. In the year 2000, due to the sudden demise of Bhagwan Dass Arora, By-elections took place and that is when Parminder got a ticket from the Akali Dal from Sunam. He came out victorious in these elections and moved a step further to be elected to the Punjab Legislative Assembly. His hard work showed positive results in Sunam and the people appreciated his honest nature and passion for making it a better place. This is the reason why he was elected for the next three consecutive terms i.e., 2002, 2007, and 2012. He kept climbing the ladder of success in the journey with each passing tenure. He was elected leader of the Shiromani Akali Dal in August 2019 in Punjab Assembly but left the party due to conflict of interest in January 2020. He believes that one should always keep their principles and morals above anything else. Because the principles and morals that you stand by and believe in are what make your personality and give you the strength to fight with the world.

Apart from politics, he has a great interest in sports and keeps doing his bit for this sector as well to the best of his capacity. He has been the President of the Cycling Federation of India from 2011 till date and is also an executive member of the Asian Cycling Confederation. He makes sure that people from all walks of society get a chance to prove their worth in the sport of cycling. The Cycling Federation of India is affiliated with the Indian Olympic Association and various other international bodies like Asian Cycling Confederation and Union Cycliste International. With his efforts, sportsmen who want to make a career in cycling find it very easy to apply and prove their worth. They have also recently launched an E-Pathshala Programme for the cyclists to continue their education even while being out from their cities for any competitions or championships.